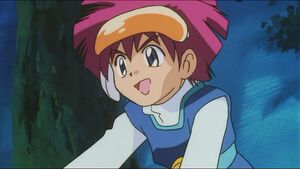 Eco (エコ) has the power of water and nature.

Eco was angry at a group of humans taking a virtual vacation in a park, littering all over it, and created a pathway to another dimension, and made them feel the pain of the trees.

Yui Kasuga was noticing and went with I.R and Ante to ComNet, and was almost trapped themselves.

In the end, Eco realizes that not all humans are selfish, and joins them.

When Eco Prism Installs his power to Corrector Yui, she aquires the power of water, such as to summon nearby water, and throw it at wished destination.

Retrieved from "https://correctoryui.fandom.com/wiki/Eco?oldid=3980"
Community content is available under CC-BY-SA unless otherwise noted.